Wednesday - decided to sleep in, ran 4 miles on a freakishly dark Town Lake trail after work. I started a tad bit late, around 5:30pm, and by the time I was making my way around, it was pitch black! Kinda spooky. No watch, no Garmin.. just me running.

Sidenote - I had to stop by Adrian's on my way home and I had the pleasure of seeing my hunka hunka husbands on the way :) Matthew, AJ, and Steve were running up Far West. I parked a few streets ahead and cheered for them. I gave Steve a special Foho "hug". Searched for Dee, but couldnt' find her. There were so many runners out, I had no clue. It was a nice ending to a good day.

Thursday
Time: 5:30am
Duration: 1:53:13
Workout: 10 miles of hills
Distance: 10 on the dot
Weather: a bit chillier, low 50's
People: Chuck and Peter and later Carolyn, then alone
Comments: Eeek. Hills. I don't feel in shape for hills quite yet, so my pace was ungodly slow... but I got them in. I started out with Chuck and Peter and was doing fine until we started climbing. The hills weren't bad, but I haven't been running them so I couldnt' keep up. I got to run with Carolyn for a few miles after that. Then I turned around and this is where the fun began.

I turned around too early by accident. I didn't read the rest of the directions that said to go to Rae Dell/Arpdale. Instead, I turned around as soon as I saw Arpdale, so I was about 2 miles short. I didn't notice this until Carolyn was gone and I had already started backtracking. We were doing an out and back, which you think would be easy. I started back and was immediately lost. I ended up running where I thought we should go and couldn't help but giggle because this was the place Dee and I got lost last year. I convinced her to run all the way down to Manchaca!! It was a funny, all time moments for us. I tried to recite her phone number, cause I wasn't sure if I could find my way back. I was running on Curto del something, Cinnamon, etc. I saw a Team Rogue person and thought I was going in the right direction, but when I didn't recognize the street names, I decided to go back to Lamar and try over again. Luckily, this made up the two miles that I was short. I finally got back on track using the map portion of the directions. Got to Rogue, showered, and made it to work :)
Posted by Priscilla at 8:56 AM 2 comments:

Time: 5:15am
Duration: Not sure, Garmin died :)
Location: Rogue
Workout: 8 easy
Distance: 8 - Garmin died
Weather: Nice and cool
People: Chuck, Peter, Emily, then later Kim and Stephanie
Comments: I had set out to plan to run my Tuesday and Thursday runs with Chuck and his peeps. I think he's faster than I am right now, but want to get my dang speed back so anyone pushing me is a great thing. We started out, and it felt ok, and after about a mile, it felt pushed. Not pushed bad, but I know if I were running solo, I wouldn't be running as fast. It wasn't uncomfortable to where I couldn't do it, so I think it was perfect. They were running 10, so at around the 4 mile marker, I turned off to do 8 as they had about a mile out and back they needed to do to get to 10. Steph and Kim were at the water and I didn't think I could hang, but decided to see how long I could go without them dropping me. I made it the entire time, and felt like I was pushing a tad bit more than when I was running with previous company. Good stuff, but Thursday, I'm going to see if I can hang with Chuck and company for the entire run.

Glad to be back in it, and I'm finally shedding the Hawaii (before and during) weight so I'm hoping the speed will come back.

Time: 5:30am
Duration: 1:26:37
Location: Barton Springs
Workout: 8 mile easy run
Distance: 8.33 miles
Avg Pace: 10:24
Weather: Weatherbug showed 40 when I left my house
People: Team Rogue, ran with Stephanie for a few miles
Comments: Since I got 10 hours of sleep, waking up at 4am felt great. I had plenty of time to pack my clothes for work and eat breakfast on my way to the workout. We ran from Barton Springs to Exposition and back on the back roads that I take home from work. I can't wait until I get my groove back. I ran by myself, and at the water stop about half way, Steph slowed her run down to run a few miles with me. It was nice catching up, but I would rather not slow anyone down. I'm actually enjoying pushing myself on the runs solo and trying to catch and play games with myself on not letting people get out of my sight.

I'm going to run my 4 miles I skipped on Wednesday tomorrow, shhhh... I don't want to skip workouts, and I don't think changing out days will matter, not in the first week. REALLY looking forward to running with my FOOLS on Saturday morning. Just an easy 10 miler, then it's into week 2!!!

Week 1 of Team Rogue and I can tell it's going to take me awhile to get used to this new schedule. I'm NOT a morning person. Tuesday, I made it to class, but ended up coming straight home today and going to bed at 6pm. Yes... I made an executive decision to back out my normal Wednesday poker game with the guys because #1 I left all my money in Hawaii, and #2, I was exhausted from work. I proceeded to come home, undress, and crash from 6pm till 4am the next morning. 10 hours of sleep... ahhh...

No workout.
Posted by Priscilla at 11:49 PM No comments:

Time: 5:30am
Duration: 1:01:43
Location: Rogue
Workout: 7 mile easy run with 4 strides
Distance: 7 miles (or on Map My Run 6.65)
Avg Pace: 8:49's or 9:16's (will wear Garmin for more accuracy from now on)
Weather: 50, nice and chilly but perfect for running!
People: Team Rogue, but ran alone
Comments: First team workout, woo hoo! I got there about 20 minutes early, played with the rope, attempted to stretch by watching what others were doing. I went to Happy Office Hours last night and decided to start with the 60 mile macro. I think I'm going to do the 70 and see how long I can keep it up :) Macro showed 4 for today, but once everyone convened, the shortest option was 7. So I did that. Pretty happy with how the run went. It felt good to run again. If the map was accurate, I ran 8:49's which is a shocker! I didn't believe it, so I mapped it out online and came out with 6.65. Even then, 9:16's is WAY faster than I've run in the last year!!

Maybe to running solo chasing people will do me some good. As people passed me, I tried to keep them in sight as long as I could before someone else would pass. Looking forward to this season.. it's gonna be a good one :)
Posted by Priscilla at 7:46 AM No comments:

Priscilla
I needed a blog to keep me busy and track my workouts! I started running about 4 years ago, but didn't get serious until about a year or two ago. I've run 4 marathons and completed several triathlons that range from the Sprint distance to the Half Ironman. I'm looking forward to training for a full in January 2009, already registered for Couer d'Alene 2009, and currently training with the best Austin Running group in town, Rogue!! Going to California to do some major PR'ing at the California International Marathon. Looking forward to making new friends and enjoying life!!! 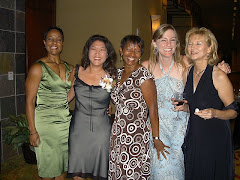 The reason why running is so much fun! 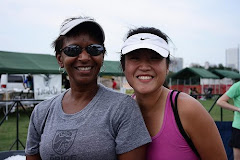 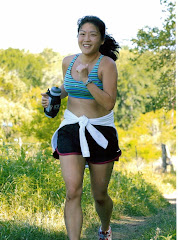